Perhaps, nostalgia is what people holding altcoins are experiencing- the bygone times of 2017 bull run where altcoins pumped to the moon and beyond. Everything since then has ironically been an uphill battle. Altcoins are dead, more precisely, shitcoins are dead. Yet people still talk about an impending alt season and expect a repetition of 2017, even if it isn’t comparatively as huge.

Pragmatically, expecting 2017-like altseason is being optimistic to the point of foolishness. There have been quite a few crypto gurus who previously predicted an approaching alt season. Turns out, it wasn’t. The so-called crypto seers and their followers are still waiting with bated breath for the alt season. Nostalgia isn’t the only thing that’s making people wish for an alt season, heavy bags with worthless shitcoins is also another reason.

To the general crypto mass, altcoin is every other crypto except BTC. They are in the right, in a way… but also wrong (to a certain extent) because altcoins mean much more than alternative coins. The meaning of altcoin has evolved over the years and it means alternative coins/projects that are working on a genuine project trying to solve a real issue. The rest of the projects are endearingly called “shit coins”. Hence it’s about time people update their definition of altcoins.

Shit coins often show data that are blatantly manipulated like the trading volume or the market cap; they are even involved in pump and dump schemes.

These metrics for altcoins aren’t necessarily available as of yet. There isn’t a particular list of top altcoins which considers all the altcoins in existence and segregates them based on a category. A conversation between Dovey and CZ sums up the dilemma.

yes, was thinking the same thing. If someone just listed the top 20 alts for the last 9 years, it should be pretty interesting. Many projects die, some did survive through the years.

There are many altcoin indexes that have crept up in the space, that give a comprehensive idea about how altcoins are varying, however, none that factor in past data. Some of these indexes include Bitwise indexes that are classified into four ranges of 10, 20, 70, and 100; there is also Bletchley Index that has Bletchley 10, 20, 40 indexes or a lesser-known index called T&C 20 Index. Bitwise and Bletchley Indexes span back to 2017, only T&C 20 Index dates back to April 2016. Data before 2016 is virtually non-existent, or not easy to get your hands on.

With the current indexes, it will be easy to gauge the performance of altcoins with respect to Bitcoin or vice versa. From these comparisons, one can draw inferences on the future trajectory of the altcoins, a particular subset of it or even Bitcoin.

These indexes would also provide the truth to the nostalgia of an alt season.

Apart from the above, Bletchley indexes describe that using these indexes could help an investor judge diversification of the portfolio and possible returns.

“The indexes are reflective of the returns an investor would achieve by purchasing all of the assets at the corresponding weights for each index… the Bletchley indexes are a much more accurate benchmark for performance of the industry to an investor than simple gross market capitalizations.”

Bitwise 10 Large Cap Crypto index includes Bitcoin, hence using the chart for deducing the relation between BTC and alts would defeat the purpose.

Through 2017 and 2019, altcoins’ combined performance relative to BTC’s price has remained dominant as seen above, however, the entire picture changed when Bitcoin entered a bear market after the 2017 pump. The performance revisited the despair phase seen before the start of a bull run in 2017 and BTC has finally crossed above all the 3 indexes, i.e., Bitwise 20, 70, and 100.

This crossover took place especially toward late March and early April, exactly the time when Bitcoin witnessed the April Fools rally, which actually, did not turn out to be a fools’ rally. This rise in Bitcoin’s price wreaked havoc on altcoins, which is clearly visible in the chart below. 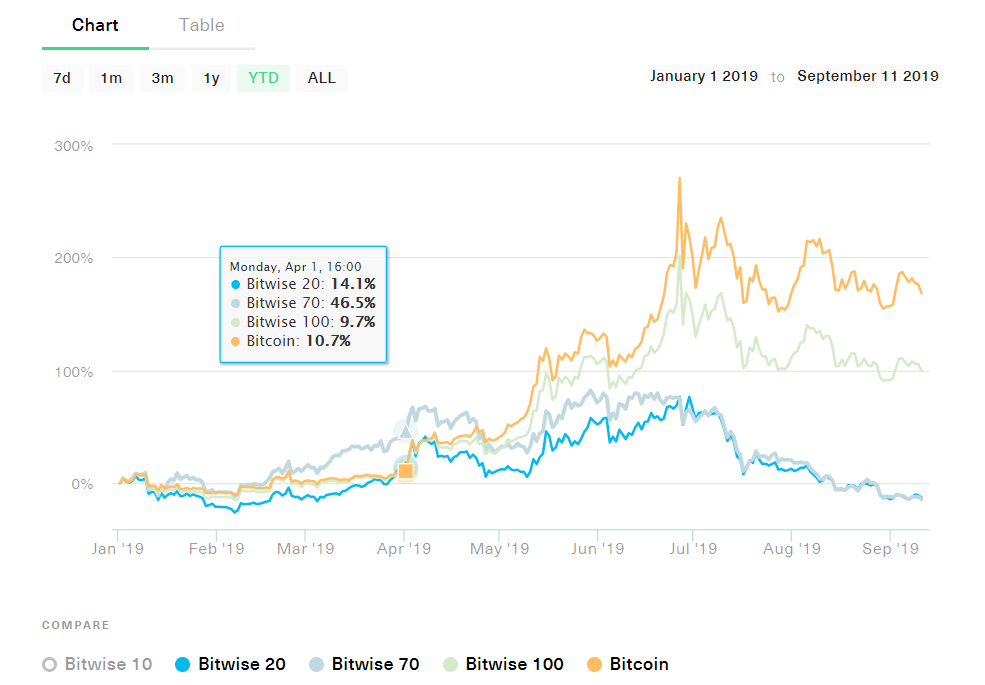 Speaking with AMBCrypto, Scott Melker, popularly known as Wolf of All Streets on Twitter, said that “alt season” has become “somewhat convoluted at this point” and that it is subjective. He agreed that there will be a time in the future when the altcoins will rally higher.

“For me, the past few days constitute an “alt season.” Multiple coins randomly exploding for 50% + gains. But that is not what people expect based on 2017… If bitcoin dominance continues to rise, alts will continue to bleed. I believe that is somewhat obvious. I also believe that some alts are already being weeded out – bad actors being eliminated is a healthy sign that the market is maturing.”

Melker further explained that altcoins, in the past, usually rallied higher when there would be drop in the Bitcoin dominance while the price of BTC was consolidating, however, the same was not true or applicable at press time and that “to look for the same indicators of alt season now is likely an act of futility”.

“The market is different, the actors are different. Retail is not around to fomo in and out of every coin that large twitter accounts shill to their followers.
I also believe that bitcoin dominance is presently higher than the numbers suggest, as there are far more alt coins than there were in past bull markets.”

Another trader Satoshi Wolf spoke to AMBCrypto regarding the altcoin dilemma and was considerately bullish on alts, even though they are bleeding dry. Satoshi Wolf stated:

“I do believe we will see an Altseason again I’m just not sure when… Until we see a trend reversal on high time frames across the board I’m not calling it an Altseason. For those who were around 2017/2018, you would know that you don’t need to buy the bottom to strike it rich, you just need to still be here with a tradable balance.”

The Generalized Story: BTC Vs. Altcoins

Even with the general definition of altcoins, which include about 2000+ cryptocurrencies, the future looks as bleak as ever. 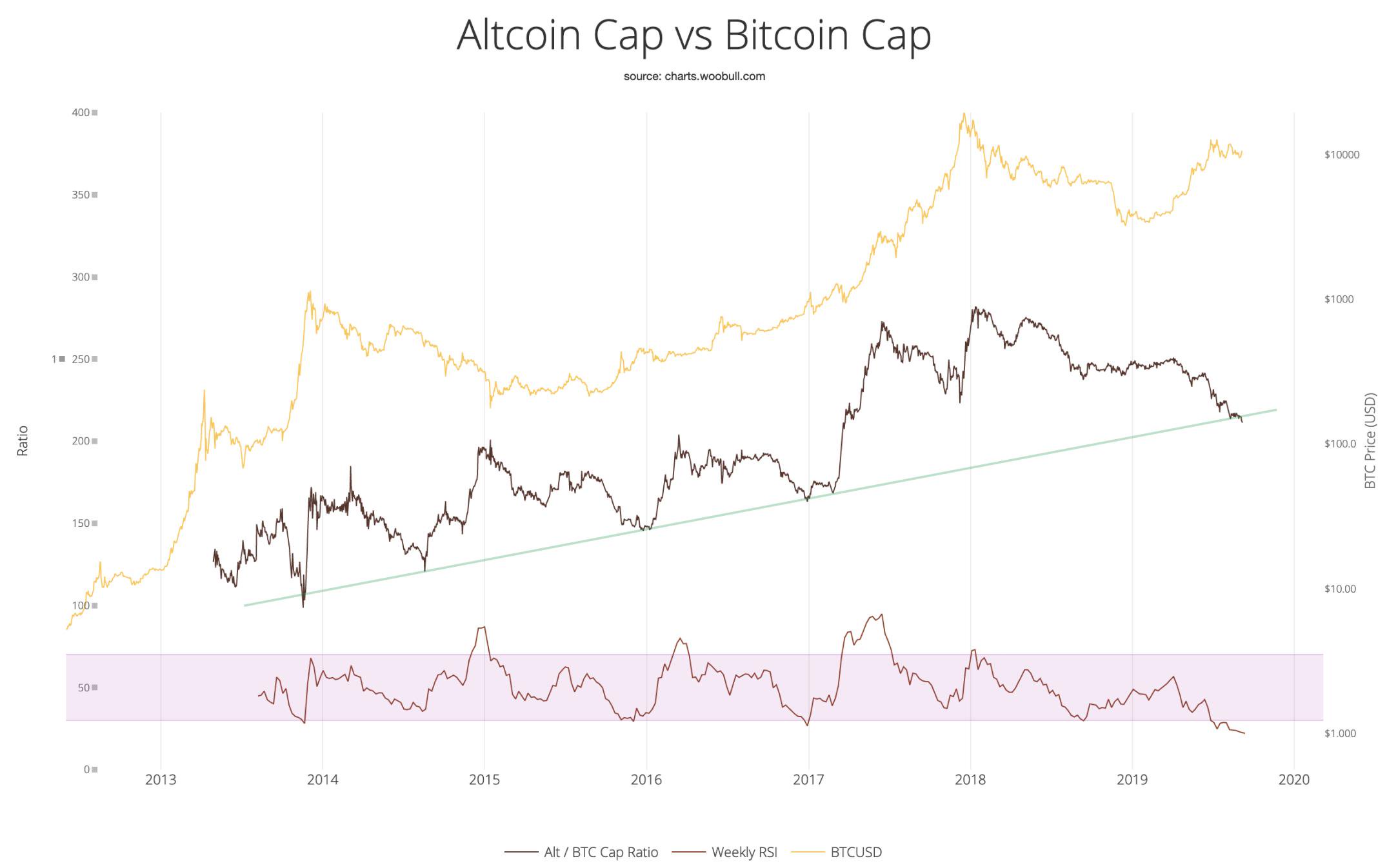 “Altcoin vs Bitcoin cap now two weeks into being tested on its 6.5 year support line. Weekly RSI is more oversold than its entire history (has been since July!)… If this level fails, I’d expect roughly a 60% drop relative to Bitcoin’s cap before we some the next area of support.”

The support line has been tested quite a few times over the years, but it has always recovered, right now, it is stuck in limbo as it has breached below this support. The same can be said about RSI, which has never been as oversold as it is since 2014. 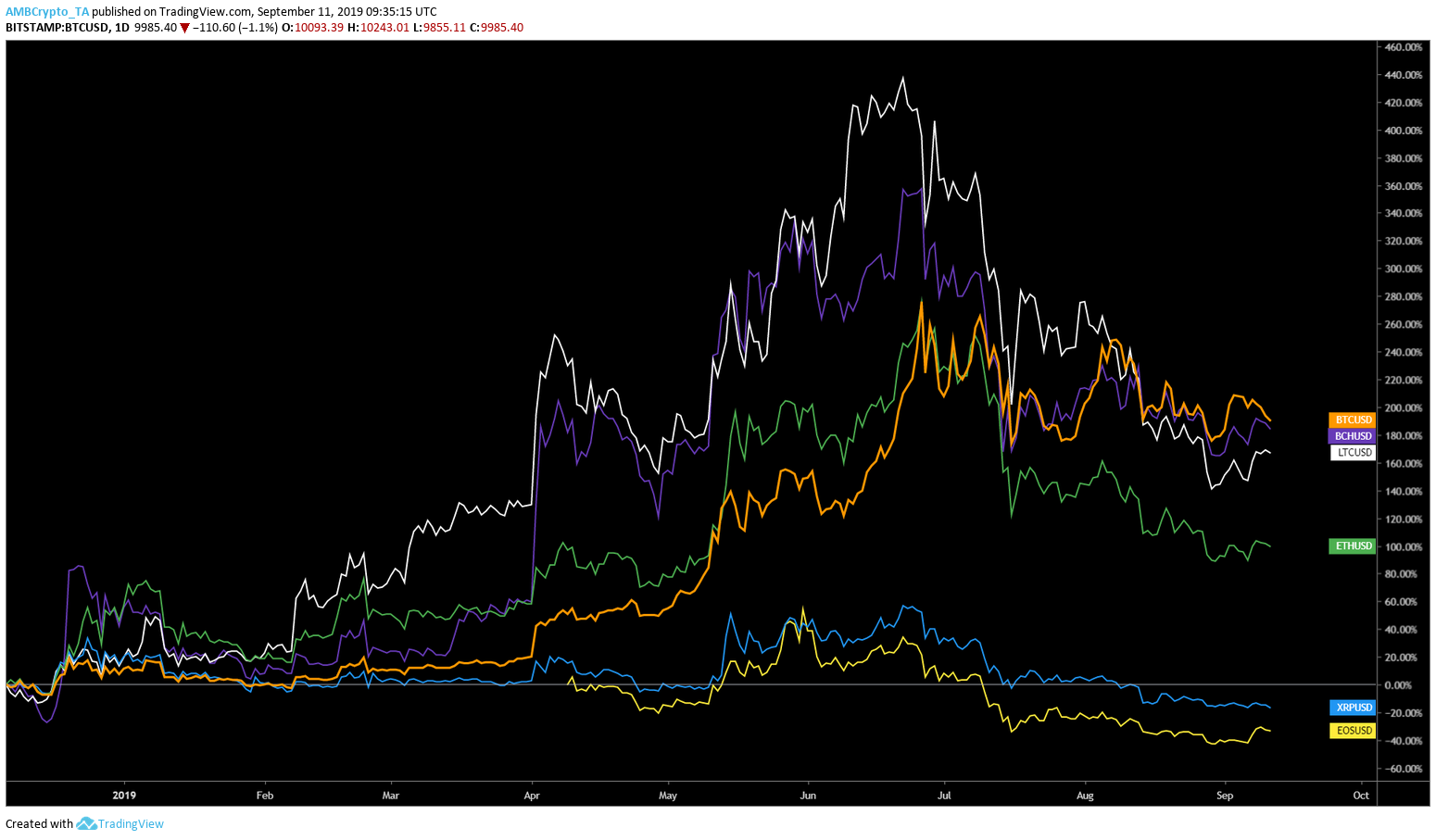 Litecoin and Bitcoin Cash managed to outperform BTC between April and July, however, they have collapsed in recent times. Other large-cap cryptocurrencies like Ethereum, XRP, EOS, were struggling to perform and dipped wildly below that of BTC’s performance.

End of an Era

The question that remains is ‘Will altcoins recover from these lows?’ If it does, there might be a chance for another alt season, but the magnitude of this is best left to one’s own imagination.

On the contrary, if it does not recover and proceeds to collapse, this would signify end of altcoins piggybacking on Bitcoin and give altcoins value, based on the project. This would also put an end to scamming investors by creating shitcoins out of the blue, which took place most of 2017 until the SEC had to step in.

Bitcoin dominance plays a major role in deciding when alts might rally and is one among the many indicators that most traders or retail look at, to determine if an alt season is around the corner. At press time, BTC dominance has broken a resistance that was holding the dominance below 70. Now that it has been breached, there may be a chance that an alt season might not happen any time soon.

An Idea to a New Metric

All the data discussed above generally dates back to 2017 and, at the most, mid-2016, which is very less and doesn’t really consider the past altogether. So here is an idea, probably far-fetched and naive, but it still an idea nonetheless.

Since it is complicated to classify top 20 or 50 cryptos throughout the time, how about classifying altcoins into two broad categories based on time? For history we have B.C. or A.D., I’m thinking we have one for cryptocurrency ecosystem as well. Litecoin or Ethereum are probably two best contenders.

The reason to use these two altcoins in particular is

Ethereum’s 24-hour trading volume has generally been higher than that of Litecoin for more than 2 years. So it would make a lot more sense to consider Ethereum for the cause. Now that we have Ethereum as a demarcation, it will be easier to segregate altcoins that were present before Ethereum (aka Legacy Altcoins) and those that are present after Ethereum (aka Altcoins).

If we do find the data of these legacy altcoins, they can directly be segregated based on market cap. The problems arise for altcoins that have developed after Ethereum; altcoins that are knee-deep in manipulation and faking volumes on CoinMarketCap. This is where services like Coinmetrics, Messari Crypto and others have come into picture in developing alternate metrics such as realized market cap, adjusted trading volume, to provide noise-free data for concerned investors and others.