The market has been in shambles for two days consecutively. The last weekend session saw most cryptocurrencies including the top three Bitcoin Ethereum and Ripple close the week with a win. However, cryptos have been developing a higher affinity to the bear pressure this week.

Before we dive into the price action, it is worthwhile to take note of other events in the industry. First, Bitcoin is trading at $80 premium in Hong Kong. Residents are resorting to cryptocurrencies as alternative forms of payment to avoid surveillance by Chinese authorities. The past few weeks have seen protests in the city escalate quickly as residents fight against main-land China surveillance.

Hong Kong continues to operate as an independent jurisdiction where cryptocurrency trading and other related activities are allowed. This is contrary to the strict laws in mainland China banning all mining and trading activities. Residents of Hong fear freedom could be taken away with the Chinese authorities moving closer.

In other news, The Securities and Exchange Commission (SEC) in the United States as reported by FXStreet postponed three Bitcoin exchange-traded funds (ETFs). The BTC ETFs proposals filed by VanEck, Bitwise, and Wilshire Phoenix approval or rejection will have to wait longer. The SEC said that it needs more time to study the proposals and better under understand the crypto market.

Bitcoin more than ever needs to gain ground above $10,000

Bitcoin price needs a Bitcoin ETF now more than ever. While the price ignored the delay by the SEC earlier in the week, its effect is catching up with Bitcoin. Recovery from the devastating drop to a low around $9,469 met resistance at $10,062. A cluster of technical indicators at this level range from the Bollinger Band 15-mins Middle, SMA 10 15-mins, SMA 5 1-hour, previous high 15-mins, previous high 1-hour and Fibonacci 23.6% 1-min.

The king of cryptocurrencies has a shortage of viable support areas. Therefore, if Bitcoin plunges towards $9,000, the only significant support area in sight is $9,125. A zone playing host to the previous month low and Pivot Point 1 week S3.

Ethereum’s return to $200 will be an uphill task 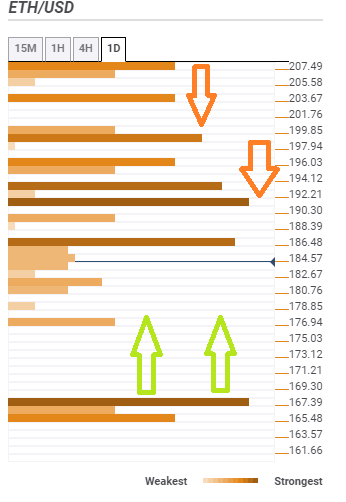 Like Bitcoin, Ethereum dropped like dead weight in the air ravaging through the $200 tentative support. While a balance was struck slightly above $170, correction is still hampered above $180. The confluence tool cites the first hurdle at $186 converging the Previous High 4-hour and the Pivot Point 1-Week S2.

If the buyers manage to retrace the steps above $190, they must be ready to battle the high concentration of sellers at $192 highlighted by the BB 1-hour Upper and previous Month Low. The journey above $200 will not be with a struggle at $194 and $199.85 respectively.

On the downside, it is important that Ethereum stays above $170 if not $180. This is because of the scarcity of credible support areas. The only significant support is seen at $167.39 currently linked to the Previous Point 1-Month S1. 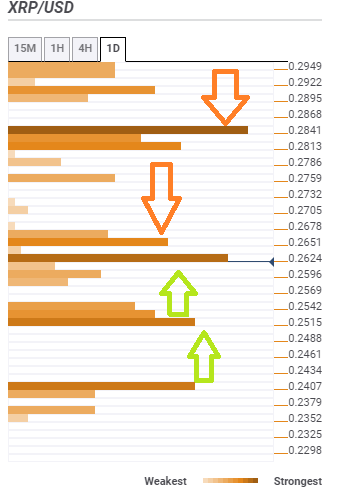 The range resistance at $0.2841 will determine the path for Ripple. A break above this will send XRP above $0.3. otherwise, failure to rise above the resistance could press the price against the support at $0.24.

Other support levels likely to cushion the drop are $0.2515; which has been made to stand out due to the previous Year Low and $0.2407 currently linked to the Pivot Point 1 Week S3.