Despite that 2019 was touted to be the “year of the security token offering (STO),” it hasn’t yet happened. What has happened, nobody predicted. Instead, the initial exchange offering (IEO) has taken over the crypto markets as the token offering medium of choice. When PwC released its fifth ICO/STO report this summer, the numbers said it all. So far this year, IEOs have far outstripped STOs in terms of funding, and the number of launches.

Furthermore, there are some among the 2019 IEO launches that are now emerging as strong contenders to existing projects. In particular, Binance Launchpad has made a name for itself among IEO platforms for hosting some of the biggest and brightest projects to hit the markets this year. Hot on the heels of Bittorrent and Fetch.AI came Matic Network, which successfully executed a sellout IEO on Binance Launchpad in April this year.

Now, it looks like 2019 could be the year that Matic goes stellar. Immediately after the IEO, Coinbase Ventures approached the project with an offer of seed investment. In August this year, Coinbase followed up by announcing it was reviewing Matic along with seven other projects for listing on its exchange. Among the other seven are long-established projects such as Dash, Cosmos, and Decred.

To Scalability and Beyond

Even at this point in 2019, it’s difficult to pinpoint any platform that’s genuinely solved the scalability challenge while preserving decentralization and attracting users. Ethereum is decentralized, but despite the ongoing efforts of the core development team, transaction speeds continue to lag behind other blockchains. EOS is capable of far faster processing speeds, but this comes at the expense of decentralization.

Many other platforms have followed on the heels of these two giants, claiming to have solved the predicament. But the fact is that few of them can rival Ethereum or EOS for the  number of dApps, daily active users, or the size of the developer community. 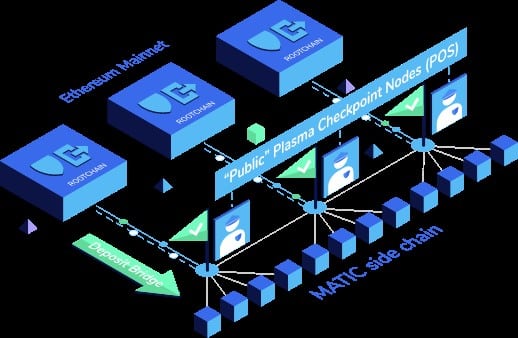 Furthermore, nobody can deny that blockchain has a usability issue. In general, dApp users have to hold tokens to pay transaction fees, meaning there’s a significant barrier to entry.

To cap it all, Facebook set the clock ticking earlier this year when it announced its Libra plans. No matter what you think about centralized blockchains, Libra promises to deliver fast transaction speeds, to a massive existing user base. Furthermore, it’s almost a given that Facebook will make sure that Libra is easy to use and integrate with its suite of platforms, which also includes WhatsApp and Instagram.

Why Matic is Different

Whereas most blockchain platforms have attempted to reinvent the Ethereum/EOS wheel, Matic is different. The project was conceived by Jaynti Kanani, now CEO, when he was looking for scaling solutions for end-user products. He realized that Ethereum’s Plasma scaling protocol was an obvious choice, and started contributing prolifically to the research, eventually producing one of the first MVPs for Plasma.

It was this solution that evolved into Matic Network. By taking a different route and developing Matic as a second-layer solution for Ethereum, the company has been able to avoid spending years developing its own mainnet. Furthermore, it can tap into the existing pool of Ethereum supporters, developers, and users.

Along with transaction speeds of 65,000 per second and all the decentralized security of a truly PoS blockchain, Matic is also one of the only projects with a focus on improving the user experience.

Scalability has proven to be one of the biggest challenges for blockchain-based gaming, so it should be no surprise that gaming dApps are flocking to Matic. One of the biggest names with whom the company is partnering is Decentraland. The two teams have been working together since 2017, and have recently tested their solution for Decentraland, enabling transaction speeds in the milliseconds.

Chainbreakers, MarbleCards, and BetProtocol are also examples of gaming dApps building on Matic. Beyond gaming, Matic has also teamed up with Binance chain to enable an interoperability solution and is engaged in joint infrastructure research with Elrond. The projects flocking to work with the company are the surest indicator that Matic is making waves.

India has long established itself as a global center of excellence for IT. Companies such as Infosys, Oracle Financial Services, and Tata Consultancy emerged from India. Although the government is resistant to accepting the idea of crypto, the country remains a hub for blockchain development.

For example, the governors of the state of Maharashtra were recently reported to be developing blockchain technology for various use cases, including supply chain and agricultural marketing. Furthermore, Indian telecoms giant Jio recently unveiled plans to build “the world’s biggest blockchain network.”

Now, Matic is also flying the flag high for the Indian blockchain scene. Reports suggest that only 0.25% of India’s IT talent is currently versed in blockchain programming. Matic is already using its influence to help promote blockchain on its home ground. For example, it sponsored the India dapp fest in Bengaluru in June this year.

By creating a bridge between local IT talent and big-name firms like Coinbase, Matic could be the catalyst for further blockchain expansion of the blockchain footprint in India.

Plasma has long been touted as the solution to Ethereum’s scalability woes. Now, it seems that Matic has leapfrogged the competition to bring true scalability to the Ethereum network. With plans to implement it’s layer 2 solution onto other blockchains in future, Matic could be the project that finally ushers in the promised new era of interoperability.