The week of Christmas can be a very volatile trading week, a review of the price action thus far is important. 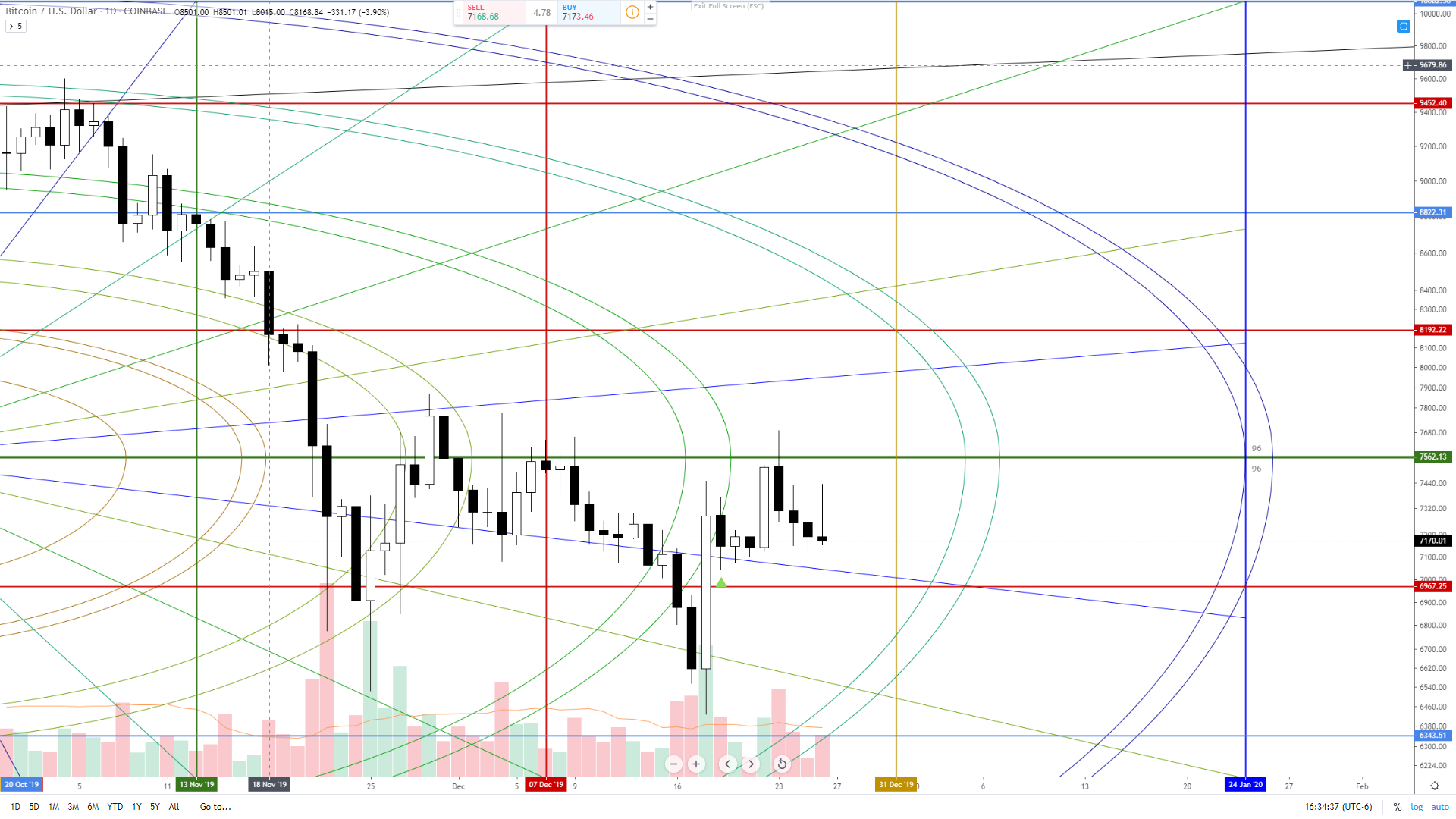 Bitcoin’s (BTC) price action as been decidedly bearish throughout the current Christmas week. This is especially true if you look at today’s (December 26th, 2019) price action, where Bitcoin was up over +2% and promptly sold off to turn negative for the day. The rally that occurred on December 22nd has been completely engulfed with bearish selling pressure. While the past four days have been bearish, if we put the closes of the daily candlesticks into context, then not much has happened. The massive +10% move on December 18th continues to influence the market. On the Gann chart above, the thick green line at 7562 represents the 3/8th Major Harmonic and is the current major resistance. Near term, support exists at the 6/8th inner harmonic (6967.25) and the 4/8th inner harmonic (6343.51). 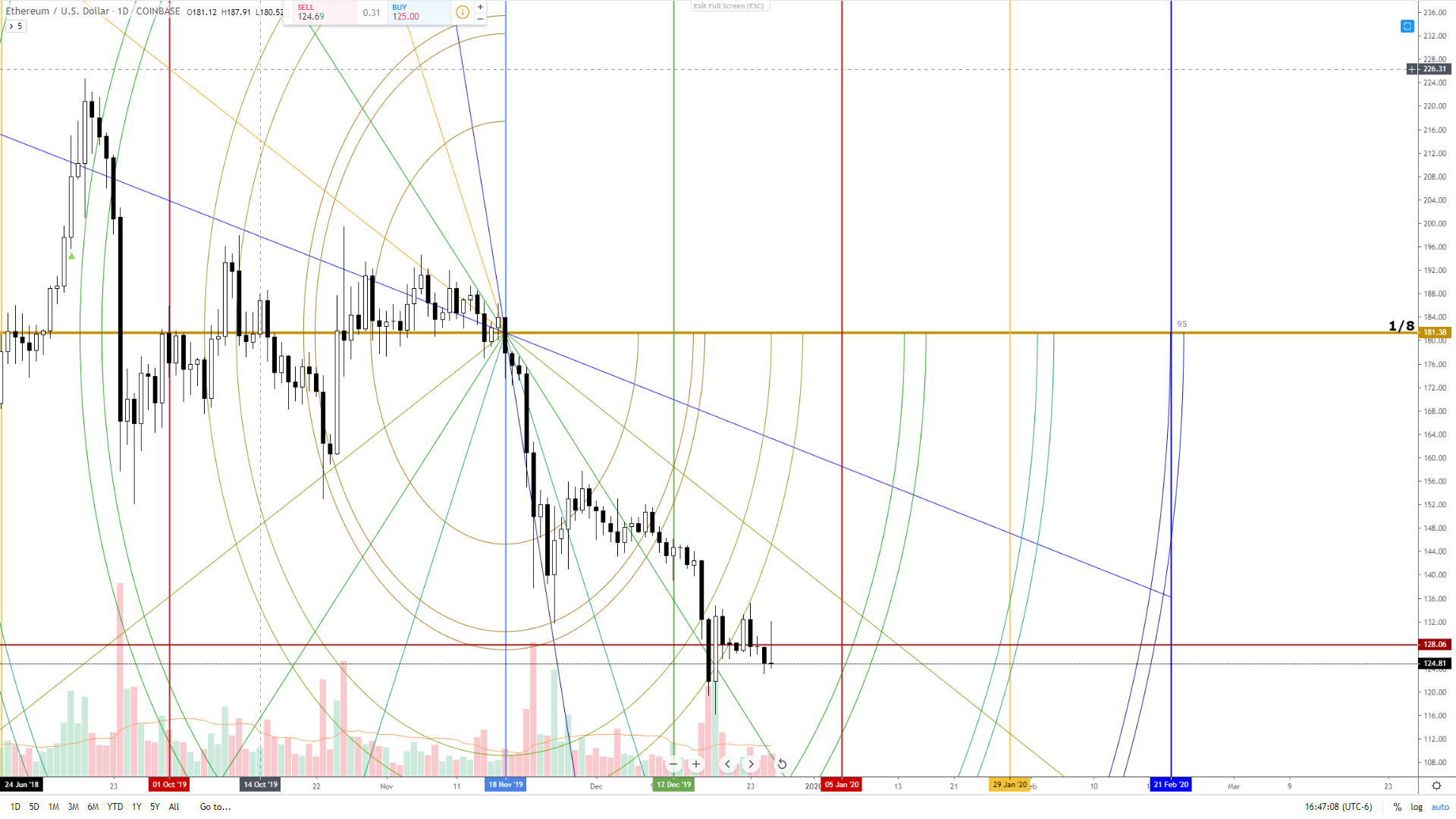 Ethereum has a fairly bearish looking daily chart. It looks like it could easily create new 2019 lows to fall below the December 18th low. The current daily candle shows clear and persistent selling, with nearly zero bullish support as Ethereum, has continued to sell off late into today’s trade session. There could be a reprieve in the form of a square of price and time. This occurs on January 5th at the 128.06 value area. January 5th is the 6/8th time-harmonic pivot, and 128.06 is the 6/8th inner harmonic. Ethereum is certainly in a precarious position. The 45-degree angle in the current square represents equilibrium and Ethereum has been trading around that 45-degree angle since November 18th. If Etheruem were to drop back into equilibrium, then that would mean Ethereum would move down to the 108 value area, a level it has not traded at since February 2019. 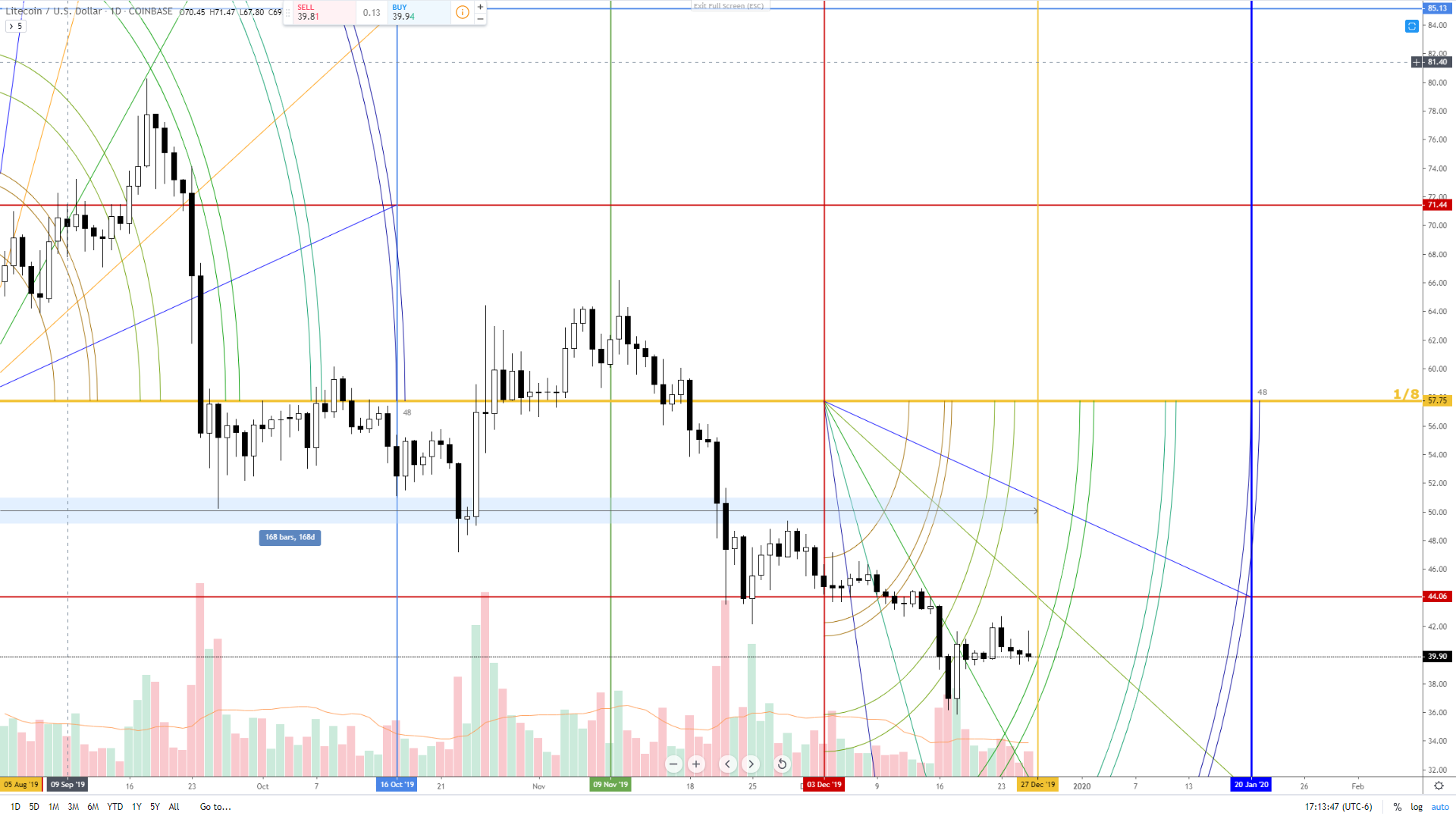 Litecoin has been trending south ever since June 22nd, 2019. That is 187 days lower. Litecoin recently made another new six months low on December 18th and the Christmas holiday has not offered any support to move higher. January 20th is important to look out for because that is the end and beginning of a new Law of Vibration cycle. It is also interesting that price seems to be pointing directly for the 2019 open at 29.78. There is a minor square of price and time on January 20th at the 30.38 value area which is the 4/8th minor harmonic. It’s interesting to me that Litecoin looks like it will make a full 360-degree price and time move, meaning that Litecoin could end 2019 at the same price it started. We should also be aware the Litecoin is not very far from creating a new two-year low. The 2018 and bear market low for Litecoin is at 22.17. Of the three cryptocurrencies in this article, Litecoin looks like the one that could face an absolute and final capitulation move, resulting in a nearly worthless cryptocurrency. I still hold some Litecoin, but it is mostly a dead cryptocurrency, with little direction and an inability to stay ahead of its competitors. I am anticipating Litecoin making some new two-year lows and possibly new all-time lows to tag the three-dollar value area.

See live prices and historical data on all the cryptocurrencies we track. Quick links to bitcoin, ethereum and litecoin.