In this guide, we explore Bitstamp and its journey from humble beginnings seven years ago to becoming one of the most popular cryptocurrency exchanges in the world. We’ll also look at the various features of its platform, chiefly trading and acquiring cryptocurrency.

A Brief History of the World’s Longest-Running Bitcoin Exchange

On August 22, 2018, Bitstamp celebrated its seventh year in operation as one of the largest bitcoin exchanges in the world. This anniversary makes it the longest-running bitcoin exchange in a sector of the crypto-economy plagued by hacks and exit scams. One of the most notable of these, Mt. Gox, was one of Bitstamp’s first competitors.

Started by Nejc Kodrič and Damijan Merlak in August 2011, the company’s first base was in a Slovenian garage with just a server, a couple of laptops and a thousand euros in capital.

Despite these humble beginnings, Bitstamp has grown into one of the world’s leading bitcoin exchanges, one that has played pioneer to a number of exchange security features and technical standards.

For example, Bitstamp was one of the first exchanges to implement multi-signature technology for its hot wallet. It was also an early adopter of Bitcoin’s SegWit soft fork for lower fees in 2017, and it instituted one of the first insurance funds, secured in cold storage, to reimburse its customers in the event of a hack.

After bouncing back from a theft of 19,000 bitcoins in January 2015, Bitstamp secured its status as a regulated exchange after it received a payment institution license from Luxembourg just over one year later. The license allows it to operate in any of the EU’s 28 countries thanks to the Union’s Single Market policy.

After becoming fully licensed, in July 2017, Bitstamp partnered with Swissquote, a well-respected analytical and finance firm to provide their customers BTC-USD and BTC-EUR trading pairs.

A great security feature of Bitstamp is that the warning to setup two-factor authentication is displayed on the account balances page as well as when you first sign up. You must also reset your password on the first log in.

Another encouraging aspect of Bitstamp is that the exchange’s internal processes, which includes IT infrastructure and data protection, are audited annually by one of the Big Four accounting firms.

All customer data is protected by using PGP for any uploaded documents, meaning that, even if hackers gain access to Bitstamp’s servers, the sensitive data is encrypted. Connections to their server are encrypted too, so make sure that you look for the green padlock in the URL tab of your browser when visiting the site.

Following the 2015 hack, Bitstamps hot wallets that hold customer funds are now multi-signature, meaning that an attacker would have to dupe more than one employee with a phishing attack, as multiple staff members will need to sign with their key to validate transactions (ote that the 2015 hack occured after a phishing attack on just one of Bitstamp’s staff members).

Bitstamp is one of the largest exchanges on the market, so users are always able to buy and sell cryptocurrencies with no hassle and without dramatically pushing the price up or down due to slippage.

The majority of the volume on Bitstamp, unsurprisingly, goes toward bitcoin, with ether a runner up, taking around 10 percent of the volume in recent days. 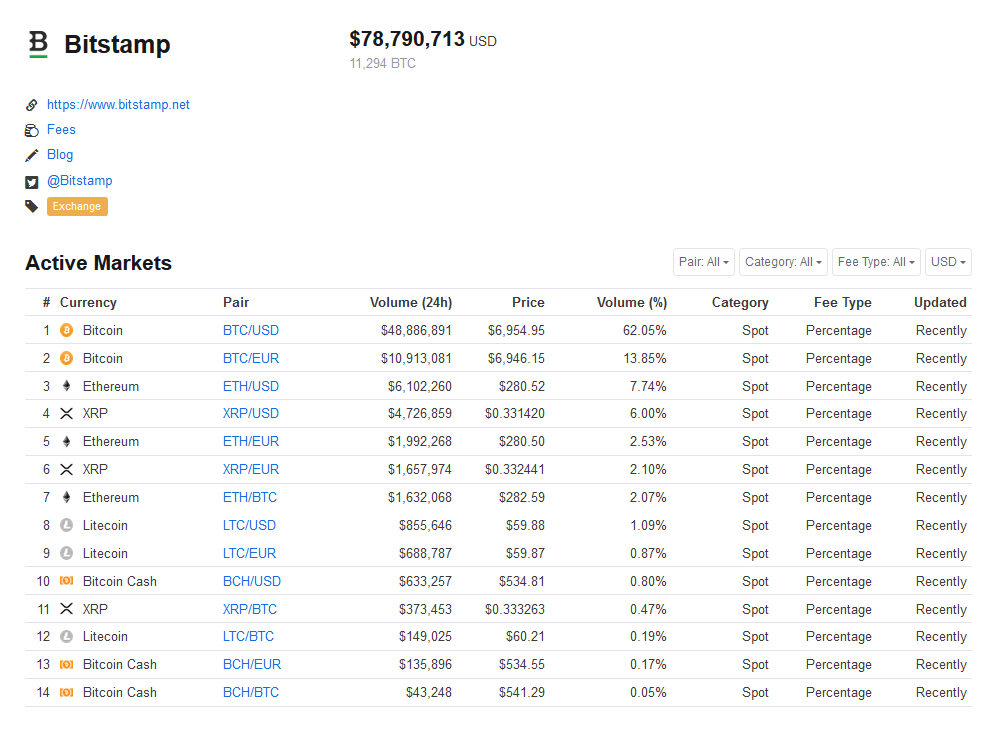 While wash trading and fake volume are valid concerns within the wider crypto exchange market, a recent report from the Blockchain Transparency Institute found that Bitstamp’s reported volume was closely aligned with the researchers’ more accurate estimation of the true volume. Another update to the rankings is expected in September 2018. 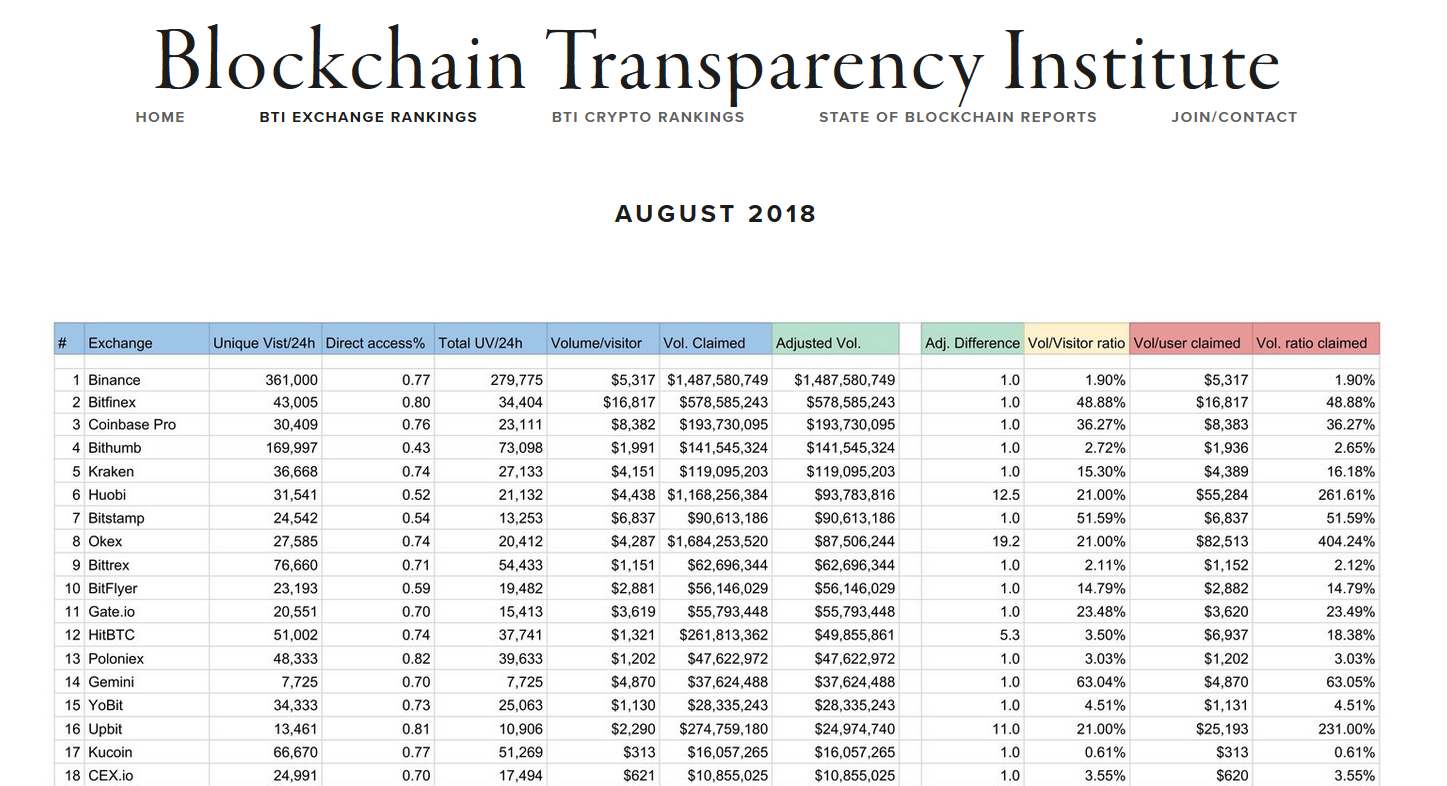 Bitstamp is one of a handful of bitcoin exchanges where evidence of wash trading was not uncovered.

As the longest-running exchange for bitcoin, Bitstamp has a pretty solid reputation. The fact that it is regulated as a payment institution in the EU also gives the exchange credibility and, in the event regulations are tightened, Bitstamp should be well-placed to overcome any difficulties.

The bank handling fiat transactions for Bitstamp is known as Gorenjska banka, a Slovenian financial institution founded in 1955. Gorenjska operates over a wide range of operations, including banking and financial services for individuals and corporations, along with a presence in the rental market for safety deposit boxes, insurance, real estate and forex markets. As Slovenia falls under the EU’s Single Market, Gorenjska follows the same standards as, and is regulated in a similar fashion to, German or French banks.

Bitstamp is one of the few major exchanges that does not rely on Tether. Whether or not the stablecoin is backed up by sufficient USD reserves is a story for another day, but there has been a lot of debate about whether USDT is genuinely backed up by U.S. dollars or whether it could be an elaborate ploy to manipulate the markets.

By not relying on Tether and not holding Tether reserves, Bitstamp will survive in the (unlikely) event of a market-wide panic should Tether collapse.

Crypto advocates and gold bugs often overlap, nevertheless, there are some that believe that crypto will make gold as a store of value obsolete. Others see the two assets as complementary.

Bitstamp’s gold withdrawal feature makes it truly unique. The feature was introduced in January 2016, with the precious metal sourced from the well-established firm Moro & Kunst d.o.o. To withdraw gold, you must be an EU resident and have a USD balance in your account. The rate is fixed at time of withdrawal and customers can expect to receive their gold bars in two to five business days.

The trading interface on Bitstamp is eye-catching and provides detailed information about markets, such as the order book and market depth, and traders can apply technical indicators such as Bollinger bands. 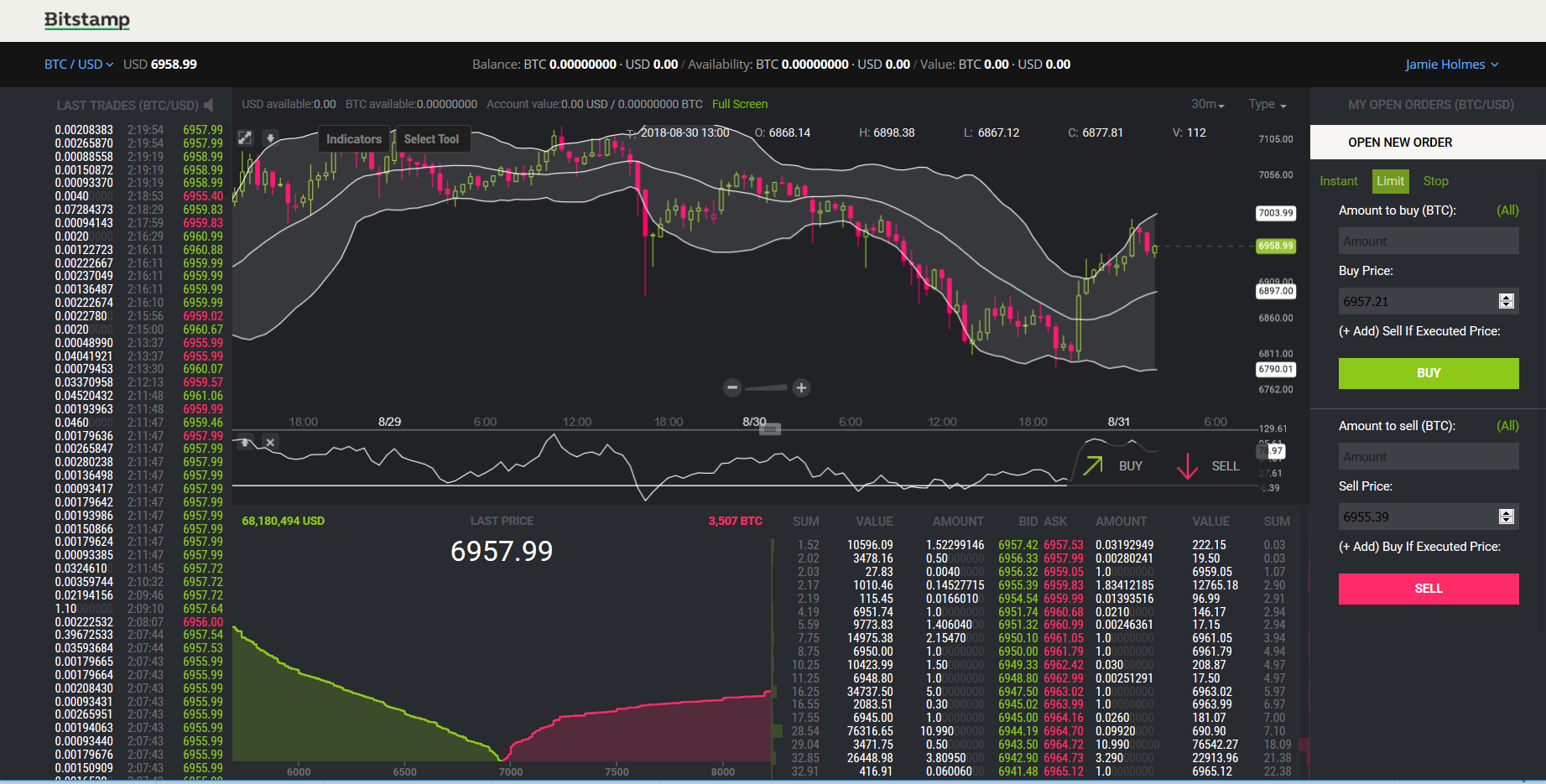 In combination with a technical analysis, SMS price alerts may be a useful alternative to limit orders and market orders. For instance, you may be waiting for a breakout above a particular level and want to assess the situation if the breakout occurs instead of buying or selling once that level is hit. Using SMS price alerts, we can set these alerts at key resistances/supports and evaluate the situation as it unfolds before committing to a purchase or sale of cryptocurrency.

Using Bitstamp’s API feature, advanced traders can set up trading bots to automatically execute trades. For example, Stefan van As introduced the Nefertiti bot in 2017 which is compatible with Bitstamp, as well as the open-source trading bot Gekko. If you are well-versed in programming, then you might even be able to write your own trading bots using the functions here.

Withdrawing crypto is free, unlike some exchanges like HitBTC which charge for both deposits and withdrawals. Other reputable exchanges often charge for withdrawals of cryptocurrency. As a crypto appreciates or depreciates, these withdrawal fees are not usually changed in line with price changes.

Fees are also relatively low for bank transfers: €0.09 for SEPA transfers for those in Europe, which is basically the same as Kraken.

Depending on your cumulative 30-day volume, fees on trading pairs when buying or selling in the market start at 0.25 percent declining to 0.10 percent if your 30-day volume exceeds $20 million, again similar to Kraken.

Only bitcoin, bitcoin cash, litecoin, ripple and ether are offered, which may be an indicator that Bitstamp is acting cautiously by not adding every coin under the sun.

The fact that the exchange requires you to identify yourself and provide a proof of address may be a downside for some. In this case, decentralized exchanges may be a better option, instead of submitting your identity and address.

The exchange has been working with Onfido, a KYC technology provider, since February 2018, to reduce and automate the time needed for verification.

Unlike other exchanges, there is only one verification level, so once you have submitted your documents, you will not need to do anything further, and you can expect the process to be completed within 48 hours. However, during the crypto frenzy toward the end of 2017, the verification time was delayed as demand far exceeded Bitstamp’s ability to take on new customers, and the exchange temporarily halted new sign-ups.

With platforms such as Kraken and BitMEX, users can leverage their positions to increase profit potential for their trades. WIth Bitstamp, there is no margin trading.

While some advanced traders might miss this feature, the fact that there is no margin trading may be a slight positive aspect for some who are not accustomed to taking such risky trades, and beginner/amateur traders may want to practice on Bitstamp using market/limit orders to buy/sell cryptos before trading with leverage.

Market and instant orders both buy/sell immediately at the best available price, and they differ only in that you can determine the quantity you wish to purchase with market orders. Limit orders allow you to set a level, or “limit,” you want to enter and exit a trade and is executed automatically once the market reaches the limit. Finally, stop orders allow you to limit your losses in case the market moves against you after you buy or sell or if you want to set up a trade to execute a buy/sell on a breakout.

Overall, Bitstamp is a solid bitcoin exchange, ideal for European citizens. Despite not having margin trading, Bitstamp is a good choice for acquiring cryptocurrency due to its reputation, free withdrawals of cryptos and competitive fees. The ability to withdraw in gold is also a useful feature for those cryptocurrency investors who have not yet diversified into precious metals.

Margin trading and the addition of a handful more altcoins that have real-world utility could make this exchange even more potential for taking market share. Similarly, the addition of an autonomous exchange, in which cryptocurrency projects list their own crypto assets autonomously, similar to Huobi’s HADAX exchange, could be used as a preliminary stage before adding new cryptocurrencies to the main exchange.