The price of Bitcoin continues to take a tumble. The number one cryptocurrency according to market capitalization continues to experience a tumultuous 2018. One expert even predicts that BTC may bottom out at $2,500 as the crypto market continues to struggle.

More than a week ago, BTC dropped $1,000 (from $7,700 to $6,700) in the space of a few hours as a wave of selloffs hit the market. The period coincided with the Coinrail hack as well as the U.S. government demand for information from top exchange platforms on suspicion of price manipulation. 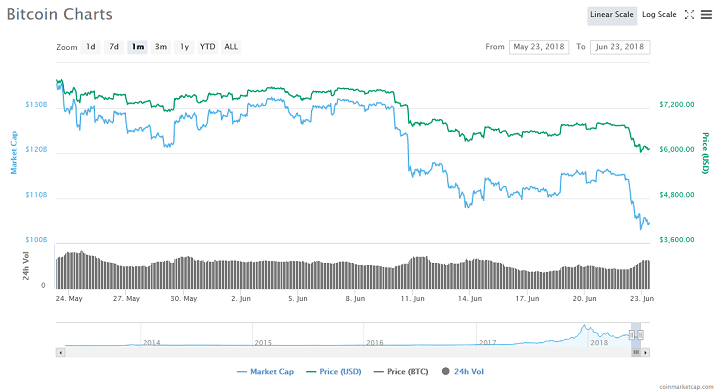 In the past few days, BTC has experienced some degree of recovery, but all that was wiped away on June 21 as prices fell below $6,500. At the time of writing this article, Bitcoin is trading slightly above the $6,100 with a seven percent decline in the last 24 hours.

In a recent CNBC article, Bill Baruch, the President of Blue Line Futures said that Bitcoin is approaching its bottom level. According to him, there are signs that the volatility of the market is “depressed.” Baruch also revealed that the BTC sales market has become supersaturated.

Fears of two back-to-back cryptocurrency exchange hacks may have pushed retail investors over the edge. The market is to stranger to panic selling at the slightest hint of a crisis. Conversely, Janine Wolf of Bloomberg declared recently that there is no end in sight for the current downtrend, saying:

According to the Directional Movement Index, bitcoin is on its strongest negative trend since the sell-off earlier this year. The index’s ADX line is currently at 39.3. Anything above 25 is considered a strong trend. Meanwhile, the index’s DVAN trend line, a divergence analysis that measures buying or selling pressure, is also giving off ominous signals.

No matter the extent to which BTC falls, experts like Luis Carranza, the founder of London Fintech Week believes Bitcoin will bounce back, saying:

Crypto is unpredictable. There are massive spikes and drops. $4500 could be the bottom, but nothing is preventing $2500 from being the bottom.

Bitcoin optimists point to the emergence of regulatory clarity and the influx of institutional investments as reasons why BTC will recover. Commenting on the role of clear regulations in the market, Gavin Pannu of the London Academy of Trading said:

Central Bankers have been quiet during the cryptocurrency bull-run and have been doing their due diligence with research and white papers carried out by regulators and experts in the field, and the market is anticipating an optimistic view from Central Banks. Regulating cryptocurrency would ease investors’ concerns.

On the subject of institutional money coming into the market, experts like Matthew Newton of eToro believe it breathes new life into the industry. According to Newton, the presence of large investors in the market is an “important development” in the crypto world. Notable names like Goldman Sachs and Nasdaq have made significant inroads into cryptocurrency in recent months. However, Newton believes that the proper regulations will make big money flow into the market, saying:

For institutions to fully commit, they’ll need more structured products and some sort of regulatory oversight. Reputational risk is a big issue for them, as is overcoming the media skepticism. Once an appropriate regulatory framework is in place, big-ticket money is likely to follow suit swiftly.

What is your Bitcoin bottom price prediction? Do you think BTC will attain the heights reached in late 2017? Keep the conversation going in the comment section below.

Image courtesy of the CoinMarketCap.